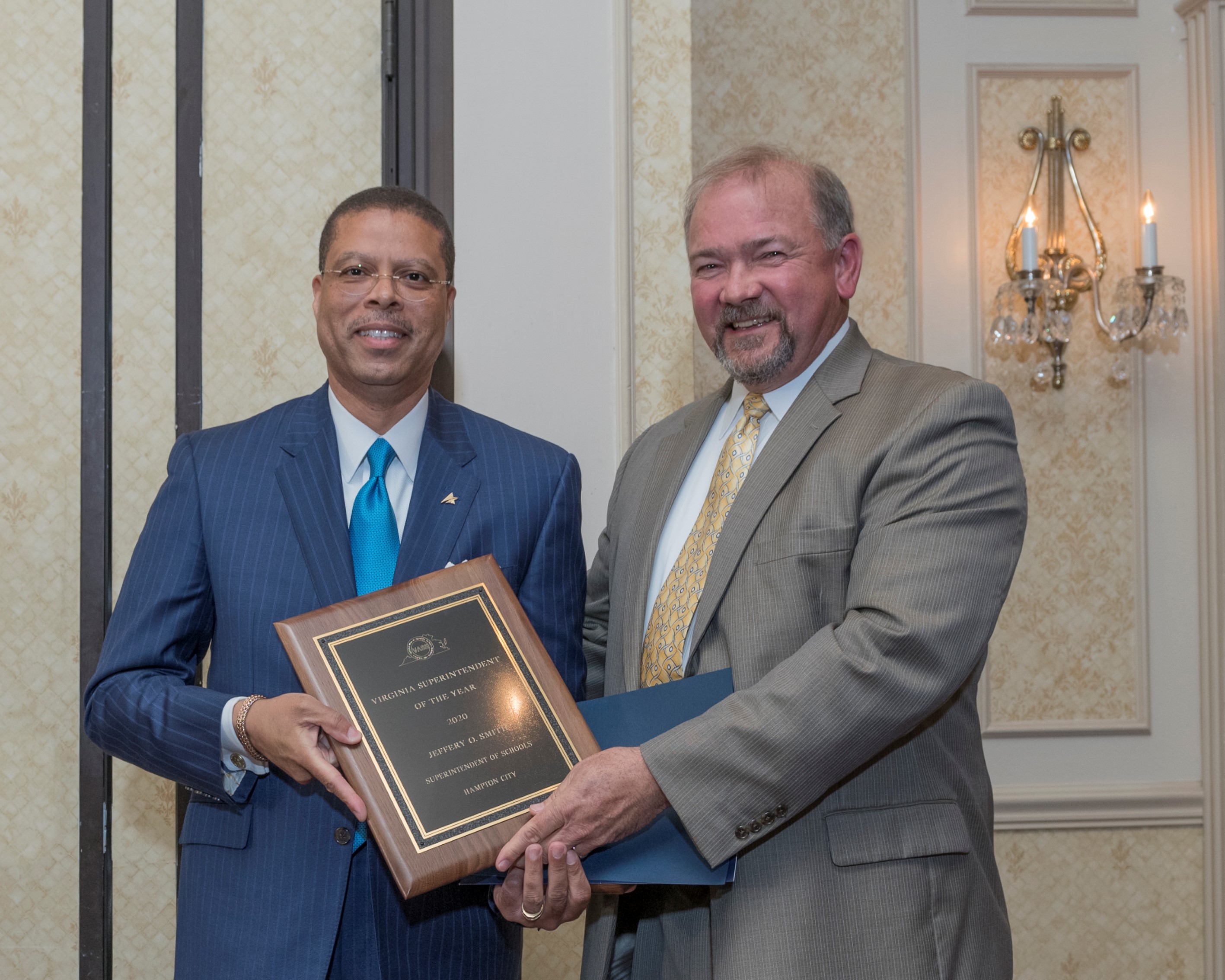 During his four years as the chief executive of 14th largest school division in the state, Dr. Smith has been responsible for Hampton City Schools’ many achievements.   He developed division-wide processes and structures that helped Hampton move from having 41% of its schools fully accredited to 93% this year. In addition, the school division increased its on-time graduation rate from 88.3% to 92.6% and it reduced its dropout rate from 5.1% to 1.57%. These gains are particularly significant in light of the fact that 57% of the division’s 19,000 students are enrolled in the federal free and reduced meals program.

Dr. Smith helped Hampton establish a PreK-16 pipeline for dual enrollment through the creation of opportunities for students to start or complete an associate degree while simultaneously acquiring high school credits for Advanced Diplomas. As a result, the number of Hampton students participating in dual enrollment programs at their high schools and off-site has increased from 61 students during the 2015-16 school year to 367 in 2017-18.

As the chief architect of Hampton’s five-year master plan, Dr. Smith transformed several of the division’s high schools into college and career academies where students learn through a rigorous career-focused curriculum to apply classroom learning to real-world career experiences. The sixteen college and career academies and 44 career pathways created by Dr. Smith and his leadership team serve as a model for the other 132 school divisions in the state.

All of these accomplishments required Dr. Smith’s innovative leadership in which he was systemic in his focus and data-oriented in his decision-making. To attain his students’ collective academic achievements he initiated a process requiring his administrators to do brief classroom observations, give targeted feedback to teachers, create a plan of action for changes in instructional strategies, model the new strategies, and then follow-up with more observation and feedback. This was just one of many division-wide strategies that Dr. Smith employed for his students to become more successful.

In presenting Dr. Smith with the Virginia Superintendent of the Year Award, VASS Executive Director Ben Kiser said, “Jeff Smith has done an outstanding job representing all Virginia educators as a staunch advocate for the state’s public school students.” He continued, “Not only has he been persuasive among state policy-makers about the needs of Virginia’s students, but also his transformative leadership has created an outstanding example of an innovative school division that is helping students to meet the expectations of Virginia’s businesses and communities in the state’s new Profile of a Virginia Graduate.”

Dr. Smith’s highly capable leadership in Virginia is a function of his broad experiences as an education administrator in eight different Virginia school divisions. He started his administrative career as an assistant principal in King George County Public Schools in 1993 before working as a principal in Westmoreland County and as a principal in Hanover County from 1994-2000. He then served as an Assistant Superintendent in three different school divisions before his first superintendent appointment in West Point in 2008 where he remained until his current appointment as Hampton’s Superintendent in July 2015.